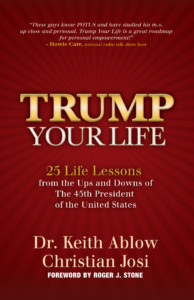 NEW YORK—JUNE 2, 2020—Morgan James’s new release, Trump Your Life: 25 Life Lessons from the Ups and Downs of The 45th President of the United States by Dr. Keith Ablow and Christian Josi (Foreword by Roger Stone), gives readers the 25 key secrets of Donald Trump’s success in life, business and politics. Trump Your Life is being released early due to demand and its topic aligning with the political events currently unfolding in the U.S.

With autonomy and liberty under siege in America, the 25 key lessons presented in Trump Your Life will enable readers to become just as resolute, resourceful, and resilient as the President himself. Dr. Ablow, Mr. Josi and Mr. Stone tapped a combination of their personal experience with the President, decades of creative, political, and media work, and piercing psychological analysis to write Trump Your Life.

If you would like more information about this topic, or to schedule an interview with Dr. Keith Ablow and/or Christian Josi, please call or email Dave Mohel at dave@blueskinsolutions.com or 703-217-2660.

Dr. Keith Ablow is the author of 15 books, including the New York Times bestseller The 7 Wonders (with Glenn Beck) and the international bestseller Living the Truth. He practiced psychiatry for 25 years and served for a decade as the Fox News on-air psychiatrist. He was the host of the nationally syndicated Dr. Keith Ablow Show, has appeared as a guest on over 1,000 national television broadcasts, and has written over 500 articles for publications including USA Today, the Boston Herald, the New York Post, Newsweek and Discover. Dr. Ablow currently resides in Newburyport, MA.

Christian Josi is a leading communications advisor and a veteran of center-right/libertarian politics and non-profit management. He is an author, columnist, internationally known songwriter, and recording artist. Christian has five albums and a host of guest appearances on other artists’ recordings. He is also a documentary film producer, and frequent columnist for a variety of publications. Christian is the Founder and Managing Director of C. Josi & Company, a global communications resource firm based in Virginia Beach and Washington. He currently resides in Virginia Beach, VA.