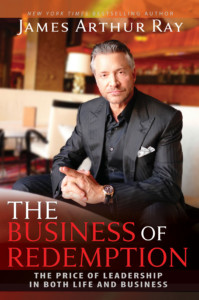 HENDERSON, Nev. and NEW YORK— February 11, 2020—Morgan James’s new release, The Business of Redemption: The Price of Leadership in Both Life and Business, by James Arthur Ray, is an exploration of true leadership and its price – in both life and business. James Arthur Ray sees how, in a world that often appears to be spinning out of control, there has possibly never been a time when the need for true leaders has been more urgent than today.

In The Business of Redemption, James Arthur Ray brings together his nearly 30 years of experience in leadership, entrepreneurship, performance, and business. Ray tracks his successes and failures in business, suggesting that leadership is earned through resilience, grit, and resourceful intuition. He explains that success in business can only be accomplished by being courageous in the face of disappointment, getting back up, and committing to a renewed vision for the future.

James Arthur Ray understands that a true leader takes absolute responsibility when things go badly and fights for a cause that’s bigger than their own personal creature comforts, moods, and needs. He highlights the primary leadership skills necessary for success in The Business of Redemption, which are emotional intelligence, strength, mental fortitude, and creativity. Ray emphasizes that leaders must make their physical, emotional, mental, and spiritual health a priority, in order to effectively work within a chaotic and disruptive world.

If you would like more information about this topic, or to schedule an interview with James Arthur Ray, please call Nickcole Watkins at 516.900.5674

About the Author: James Arthur Ray is the author of six internationally best-selling books, including his New York Times bestseller Harmonic Wealth. Ray has worked with over 1 million people from 145 countries through his audio, video, coaching, and life and business leadership programs and over 1 million people have attended his live events worldwide. He has appeared numerous times on Larry King Live, Piers Morgan, The Today Show, Good Morning America, CNN and Oprah. After rising to the pinnacle of his profession, he and his company were involved in a tragic accident in 2009 and he lost everything. Since that time, he has applied the same strategies he taught his clients for decades to rebuild his own life and business and to come back strong and his life story is told in the CNN Documentary Enlighten Us released on CNN in 2016 and now on Netflix. Ray currently resides in Henderson, Nevada.