Horizons Collide Is an Emotional Journey of Faith 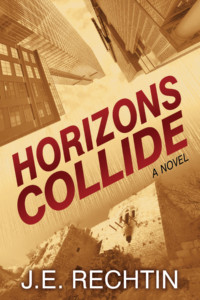 In Horizons Collide,  J.E. Rechtin addresses some of the most difficult challenges that Christians face through the story of Billy, a young man struggling with the loss of loved ones. This also leads to a loss of faith, taking Billy’s life down the wrong path. When he discovers a way to travel back in time, Billy tries to undo the past in an effort to escape from his troubles, but all does not go according to plan.

An accident sends Billy much farther back than he expected, bringing Him face to face with Jesus, whom he blames for his life of pain and loss. This detour forces Billy to truly get to the heart of his issues. Faced not only with the challenges of living in the wrong time period but also with his internal crisis of faith, Billy must mature in his faith and soften his heart before returning to his own time. As Billy’s life is transformed through Horizons Collide, readers are also inspired to regain faith and hope in their own lives.

If you would like more information about this topic, or to schedule an interview with J.E. Rechtin, please call Nickcole Watkins at 516.900.5674.

About the Author: J.E. Rechtin fell in love with space flight at a young age when he watched NASA send astronauts to the moon. Though he never made it into a rocket, this led him to become a licensed pilot, firefighter, and EMT. Rechtin turned his attention to writing later in life, and continues to live in Burlington, Kentucky, which is located in the Cincinnati, Ohio area.